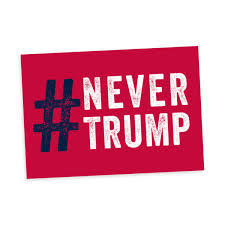 I just re-read my blog post from back in July and it still rings true now more than ever in my opinion. I feel obliged to give one last written update on my feelings regarding the election before it’s finally all over and we can go back to normal life (if there is such a thing) in just a few short weeks. If only just to address some of the sad themes that keep recurring.

I recently received an email from a friend that articulated why they had been pushed over the edge to vote for Trump. It was a long summary of why Hillary is corrupt/evil/lied/cheated/ etc. A well articulated list of reasons why most of us can’t stand her and won’t vote for her no matter what. I told him this is a respectable opinion and he had done his homework which led him to that decision. He didn’t try to sway my thinking, just articulate the path he went down with his reasoning to get to where he’s at. It was solid. And I agree completely with it.

However, I still won’t be voting for Trump even with all the ample evidence of her corruption. I have two main issues why. (and several smaller sub issues)

1. Evangelicals are destroying themselves and their credibility this election.
2. Republicans are worthless and conservatives really need a new party.

But first a small summary of where we are currently and my thoughts on it.

So now let’s address issue #1.  Evangelicals are destroying themselves and their credibility this election.

I don’t believe it’s ok for evangelicals to fear monger and bastardize scripture to convince people to vote for the big R no matter what in hopes to have a seat at the table of politics. Here are a few examples of evangelicals throwing away their credibility for politics. And they wonder why Millennials don’t come to church?

Jerry Falwell Jr saying he’d vote for known womanizer JFK because he had good policies. He also stated that Trump’s sexual assaults (or comments) were in the past and should be overlooked. While his university is kicking out football players for….wait for it…. “sexual assault in their past.”
http://wsls.com/2016/09/12/two-liberty-football-players-suspended-for-violating-sexual-harassment-policy/
http://www.thedailybeast.com/articles/2016/10/18/jerry-falwell-axes-anti-trump-story-from-liberty-university-s-student-newspaper.html?via=twitter_page
Ben Carson has/is destroying his reputation. He is a brilliant man, but he is making a fool of himself while he shrills for Trump.
http://www.motherjones.com/kevin-drum/2016/10/ben-carson-christian-values-we-can-worry-about-piffle-later
http://politistick.com/ben-carson-set-aside-christian-principles-elect-trump/
Atheists believe trump has less moral character then evangelicals do.
http://hotair.com/archives/2016/10/18/poll-44-white-evangelicals-think-trump-strong-moral-character-just-18-no-religion-agree/
Pence says we should forgive trump. I’m pretty sure the doctrine of forgiveness involves the person asking for it and then repenting / turning away from their sin. Trump hasn’t done that.
http://www.usatoday.com/story/news/politics/onpolitics/2016/10/12/mike-pence-liberty-trump-forgive/91948768/

Trump still hasn’t asked for forgiveness.
http://www.businessinsider.com/trump-on-god-i-dont-like-to-have-to-ask-for-forgiveness-2016-1
Catholics and evangelicals voting on race vs based on principles.
https://www.conservativereview.com/commentary/2016/10/this-election-proves-the-american-church-is-in-even-worse-shape-than-you-think
Christians seem to conveniently forget that Pence betrayed religious liberty in his state when he was governor. Apparently he gets a pass on this since he acts Christian most of the time. I thought we as Christians were supposed to do the right thing, even when its not easy or popular.
http://www.politico.com/story/2016/07/trump-vp-pick-mike-pence-evangelicals-225623
These are just a few examples. It really looks like the church is worshiping at the idol of the Republicans because they fear Hillary Clinton more than they fear God.
I’m not arguing that she won’t be a terrible president and do great harm to the church, our country, the supreme court, individual rights, etc. She will be awful! But God will still reign regardless of her winning or not, or the next Hitler being elected, or our country no longer existing. It seems Christians have forgotten that.
And finally on issue #1, a personal story. I have a friend who I respect very much tell me he couldn’t vote for Mitt Romney in 2012 because he was a Mormon, and then he told me, “We’re just gonna have to hold our noses and vote” this time, (implying we need to vote for Trump). I find that wildly inconsistent and frustrating. While I would agree that Mormonism is a cult, I could pragmatically argue using this same kind of logic that it aligns with baptist teachings probably 90% (other than the added book) and has probably produced a boatload of morally good people in the world compared to the character and actions of Donald Trump. In my opinion, he’s flat out wrong on this one. Regardless of whether Trump was running against the she-devil-incarnate or some other random politician. My friend also said that Todd Akin should resign from his campaign in Missouri for making the “legitimate rape” comment when he was running in 2012. Well Trump has said things way worse than that, so my friend is using inconsistent logic (unusual for him and his very methodical thinking) or using situational ethics. I’m not mad at him, or saying he’s a bad Christian. I just think we are all human and make mistakes, and I think he’s mistaken on this one. But hey, I make mistakes everyday too. So no judgment here. Just disagreement.

Now on to issue #2. Republicans are worthless and conservatives really need a new party.

People keep talking about how the Republican party is the vehicle for conservatives to use to advance their conservative beliefs. I think that time has long since passed and below are a few examples of how Republicans have betrayed conservatives.

Republican governor signs abortion bill in Illinois.
http://www.washingtontimes.com/news/2016/aug/2/bruce-rauner-illinois-governor-signs-bill-forcing-/
“How much longer will they (conservatives) continue doing the same things and expecting different results?”
https://www.conservativereview.com/commentary/2016/10/why-conservatives-will-need-a-new-party-if-when-hillary-wins
People keep talking about the supreme court, but fail to forget President Obama has appointed over 300 judges to the lower courts. Less than 1% of cases make it to the supreme court. It seems to me all these pragmatic voters worried about the supreme court can’t seem to do math in this case. It’s worth considering due to the 30ish year terms on the bench and the power they hold, but weighed against the math of the number of cases that don’t make it to the supreme court really invalidates this fear based argument for Trump.
http://www.foxnews.com/politics/2016/08/31/obama-appointments-already-pulling-appeals-courts-to-left.html

Republicans have had the house and senate for how many years now? How many veto’s overrides have they done to President Obama? Just 1.
http://history.house.gov/Institution/Presidential-Vetoes/Presidential-Vetoes/
As far as the platforms go, It’s just words. Actions and votes are what I care about. Show me the 2012 Republican platform and I’ll show you numerous examples of Republicans crapping all over it for (insert political reason here). Print out the super conservative platform they just passed. Let’s wait 1 year, not even 4, and I’m sure that sadly I will be able to do the same. Rank and file Republicans don’t care about platforms. They don’t care about voters’ wishes. They care about power, lobbyists, and their pet projects, and how all 3 of those intertwine for their personal benefit. You’d be hard pressed to argue that I’m wrong on that last sentence. I wish it weren’t so. I don’t understand why people put so much faith in these words when they haven’t kept their word or fought for conservative values in the last 20 years. It’s mind boggling to me.
I have friends here in Missouri that support Roy Blunt completely. Roy Blunt has an F rating (39%) at Conservative Review. They support him because he votes conservative on religious liberties and abortion. (which are very important to me!) He doesn’t vote conservative on much else. Especially fiscal stuff. While I can understand that logic and can even partially agree that you have to take what you can get in politics, at some point you have to demand better. I realize there are no better alternatives in the Blunt race this fall, but I won’t support him. There are better flawed senators on the national level (see Rand Paul, Ted Cruz, Mike Lee) who have A ratings from conservative review. (Or pick your favorite conservative rating site, ACU, Heritage, etc.) I’d rather support a candidate who votes conservative 92% of the time as opposed to 39% of the time, if I have to support one at all using the “take what you can get” logic they subscribe to. At some point, (other than the manual labor) I think the Amish may have gotten it more right than us. We don’t need to be a part of this hackery to get table scraps in return. And yes, I realize the standard to get my vote is becoming quite high. To politicians, I say “Deal with it. Do Better.”
This is my conclusion and reasoning on this election and Republicans in general:
And finally, this is not an effort to get you to change your mind. I am just letting you know why I have come to the decisions I have. No, I will not name names for friends, family members, or acquaintances who read this. My intent is not to point fingers and start fights, but to have healthy grown-up disagreement. I will still love and care about the friends I mentioned in this article who I disagree with.
Later,
-Derek
Share

Episode 6 is live! Link in Bio. Go check it out!

Confused in your 20’s? Check out my book!

Episode 5 of the podcast is live! Go check it out!

Got to visit some amazing sights at Petra today!

Episode 4 is live! Special Edition! Check it out!

I Wrote a Book! Check it out! Link in Bio.

Amy is always up for an adventure! From trails in

It’s Turbo time! Watching one of the greatest ho